An open letter to the Hawaii State Legislature

I grew up in Hong Kong and speak Chinese as my mother tongue. I would like to testify that shark fin soup, while a common dish served in some formal banquets, does not necessarily equate to the Chinese culture and tradition. In fact, in China we also treasure the virtue of frugality, and we respect life, food, and nature. And the cruel practice of shark finning (cutting fins off a shark alive and then throwing the shark back to the ocean letting it die a horrible death) is clearly at odds with our traditional values.

In Hong Kong the public are getting more and more aware of the ugly truth behind shark fin soup, and the distaste against it is simply getting stronger and stronger day by day.

Recently I started a local campaign in Hong Kong encouraging banquet goers to cut back their "gift money" to the hosts -- by 30% -- if shark fin soup is served in the banquet. The idea is that banquet goers are the true (or major) financiers of each banquet, and they should be empowered to say "no" to shark fin soup when the host may still be saying "yes". The campaign has been receiving overwhelming support. I started the campaign as a facebook group (and later a community page) [1]. Within ~15 days, and simply by word of mouth (and latter some media coverage [2] [3]) the facebook community has grown to 15,000+ members [4].

This shows that there is a very strong sentiment against shark finning -- even in Hong Kong the world center of shark fin trade.

I would like to applaud recent efforts of the Hawaiian Legislature to pass a bill to protect sharks by prohibiting the possession, sale, and trade of shark fins. I think they demonstrate to the world that Hawaii is a leader in this cause. Back to my home town of Hong Kong, I hope these efforts will set up positive examples for Hong Kong to follow. I personally have been lobbying my friends in the Legislative Council of Hong Kong to take up the issue and enact similar bills in Hong Kong.

And then think about this question:

"Can I do something about this?"

The latest supporter numbers have been moved to here http://bit.ly/cgmLatestNumbers See you there!
Posted by 李銳華 Clement Lee at 上午11:59 沒有留言: 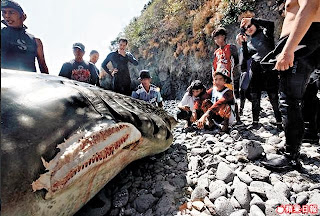