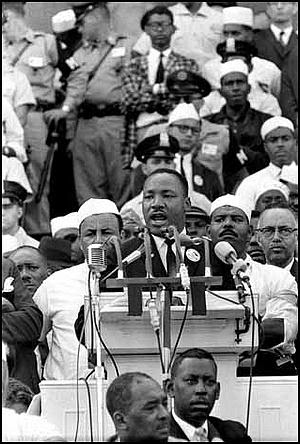 I have a dream that my four little children will one day live in a nation where they will not be judged by the color of their skin but by the content of their character.

Several thousands people were murdered on September 11th, 2001, and I think they deserve an iron-clad theory that explains everything beyond any reasonable doubts. Rushing to conclusion is not a good way to honor them.

Among the doubts, the one surrounding Building 7 is the most obvious. On that fateful day, apart from the twin towers, this relatively unknown, 47-story, Building 7 of World Trade Center also collapsed. This building was NOT hit by any plane and had only a small-scale office fire, yet it collapsed in almost the same manner as the twin towers -- completely symmetrical and in an almost free-fall speed.


From the video, we could see clearly that, at the moment of collapse, all the support of the building was gone simultaneously, which was not possible if fire was the cause of the structural damage -- the steel beams would not be melted all at the same time, if they would be melted ever (the temperature of office fire is not high enough to melt steel beams). The official explanation is very questionable and has been challenged by more than 1,500 architects and engineers, who think the building was taken down by controlled demolition (see http://AE911Truth.org)


Notice that in this video, there was a control demolition that was badly done -- where only part of the supporting structure was successfully taken down by explosives. A normal office fire can only achieve worse than this because fire can't take away all supporting structure of a building at the same time.

By comparing this footage to the perfect collapse of World Trade Center Building 7 (shown above), it is hard not to conclude that the WTC7 was taken down by a perfectly executed controlled demolition.

I detest conspiracy theory, and I think I am not spreading one. However, I think I have some curiosity and some insistence of justice. They make me think again and again on the above observation. I wish you will also spend some time thinking about it. Ask questions first, don't rush to any conclusion or explanation. I believe the solving of this mystery will be not too much unlike in many scientific discoveries, where observations often precede explanations by many years, if not decades.
Posted by 李銳華 Clement Lee at 下午11:59 沒有留言:

Thank you for introducing Senate Bill 5688, banning the sale and possession of shark fins in the Washington State.

My name is Yui-Wah (Clement) Lee 李銳華. I am a Chinese descendant. I live in New Jersey now, but I grew up in Hong Kong and speak Chinese as my mother tongue. I would like to testify that shark fin soup, while still commonly served in some formal banquets, does NOT necessarily equate to the Chinese culture and tradition. In China, we also respect life and nature. The un-sustainability of shark fisheries and the cruel practice of shark finning are at odds with our traditional values.

In Hong Kong, the public are getting more and more aware of the ugly truth behind shark fin soup. In March 2010 I started a local campaign ( 魚翅婚宴。人情七折 ) in Hong Kong encouraging wedding banquet goers to cut, by 30%, their “gift money” for the banquet hosts if shark fin soup is served in the banquet that they are attending[1],[2]. The campaign has received overwhelming support and within a month about 20,000 people supported the idea. This shows that there is a very strong sentiment against shark fin soup – even in Hong Kong the world center of shark fin trade.

I hope SB 5688 will be passed with no weakening amendments. Thank you so much for taking the lead in protecting the oceans.